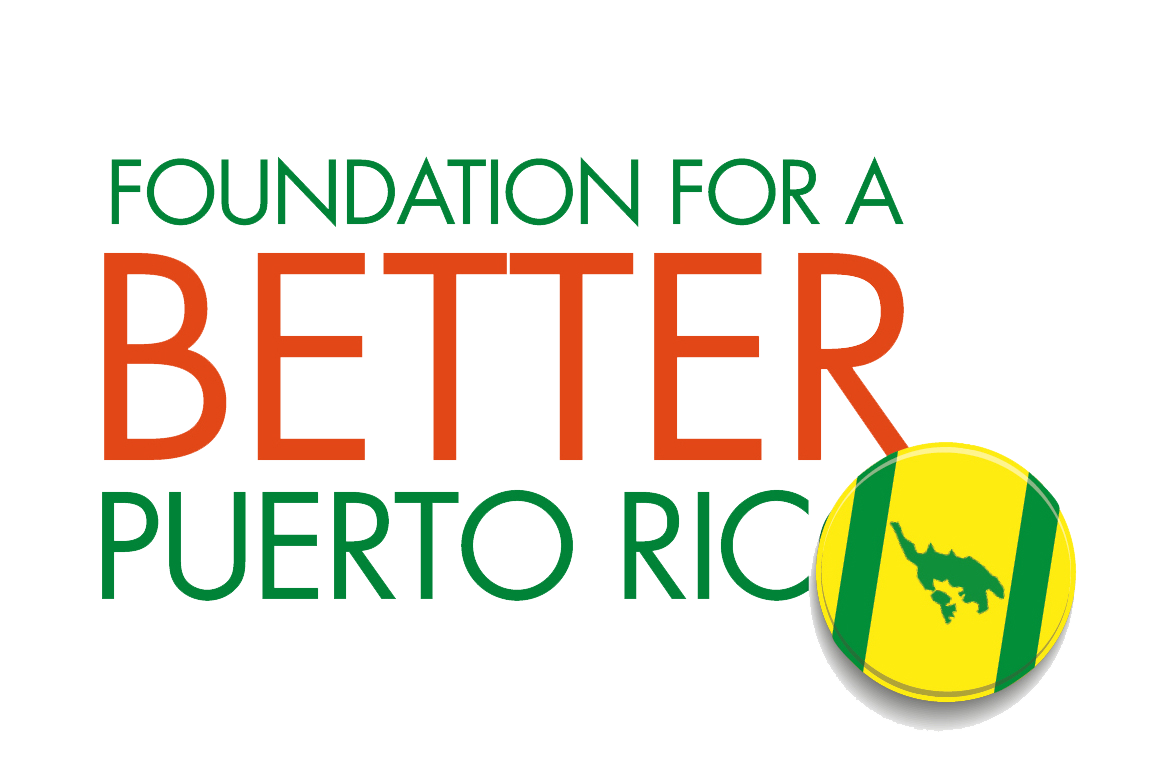 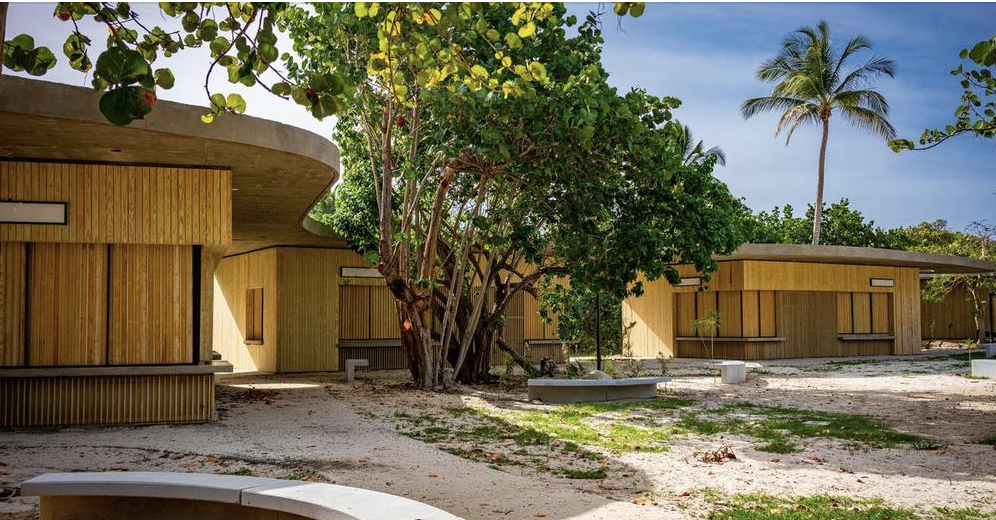 In the news: Relief for Trauma  /  Seeking to strengthen the mental health of communities. 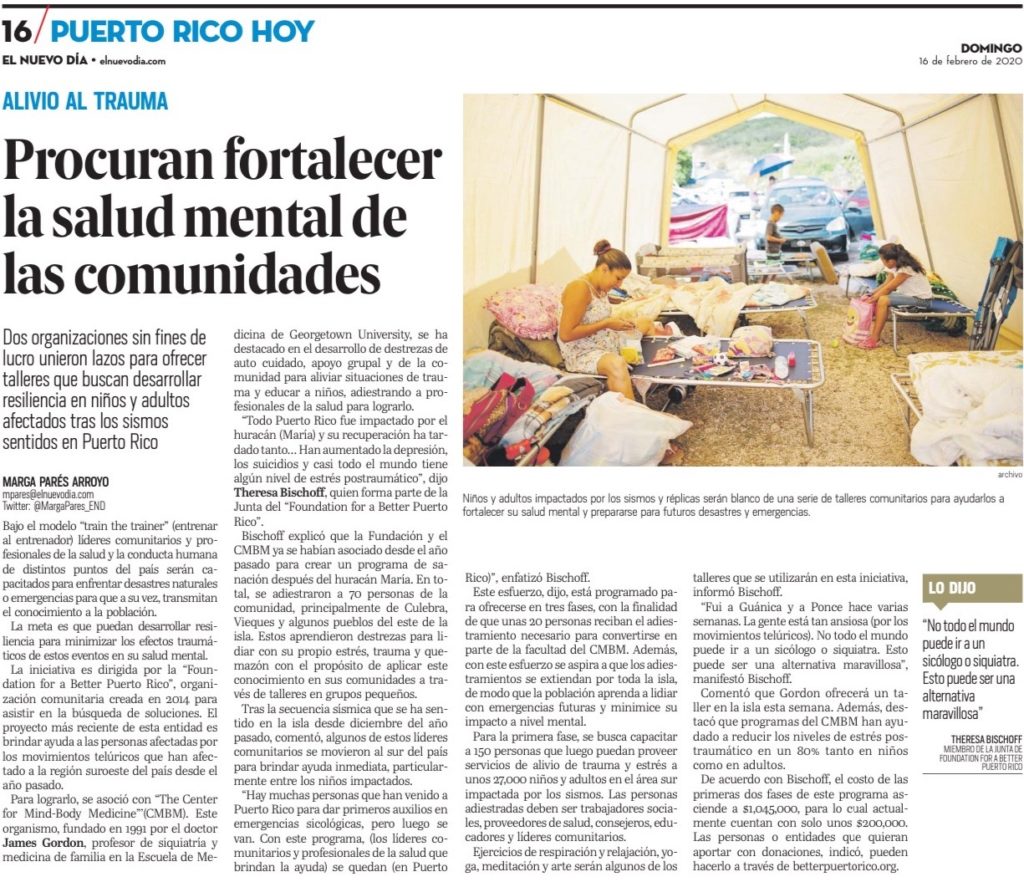 Under the “Train-the-Trainer Model” community leaders and health and human behavior professionals from different parts of Puerto Rico will be trained to respond to natural disasters or emergencies so that in turn, they could transfer their knowledge and skills to the general population.

The goal is that the community might develop resilience to minimize the traumatic effects of these events on their mental health.

This initiative is directed by the Foundation for a Better Puerto Rico, a community organization created on 2014 to help in the search for solutions for the problems confronting Puerto Rico. Their most recent project is to bring help to the people affected by the earthquakes and aftershocks that have impacted the southwest region of Puerto Rico since last year.

To achieve this, the Foundation has partnered with The Center for Mind-Body Medicine (CMBM). This organization, founded on 1991 by Dr. James Gordon, a Psychiatry and Family Medicine professor at the Georgetown University School of Medicine, is renounced for the development of self- help and  self-care group support programs rooted in community activation. These programs deal with situations of trauma and educate children and adults by training health professionals and community leaders to help care for their communities.

“All of Puerto Rico was impacted by Hurricane María and recovery is taking so long… There has been an increase in depression and suicides and almost everyone has some level of post-traumatic stress”, said Theresa Bischoff who is part of the board of  the Foundation for a Better Puerto Rico.

Bischoff explained that the Foundation and CMBM have been working together since last year to create a healing program after Hurricane María.  In total, 70 people from the communities of Culebra, Vieques and the eastern towns of the island were trained. They learned skills to help them deal with their own stress, trauma and burnout for the purpose of applying this knowledge through mind-body skills small groups and workshops within their communities.

After the earthquakes and aftershocks that have been occurring since December of last year some of the previously trained community leaders have gone to the southern part of the island to offer immediate help particularly for the impacted children.

“There are many people that have come to the island to give first aid for psychological emergencies, but they usually leave. With this program community leaders and health professionals that bring much needed help, stay  in Puerto Rico,” Bischoff emphasized.

This effort is programed to have three phases with the intent that 20 people receiving advanced training will become part of the CMBM faculty. Also, with this effort there is an aspiration that the training program can be extended all over the island in order for the population to learn to deal with future emergencies and minimize their psychological impact.

For the first phase, CMBM seeks to train 150 people that can provide trauma and stress relief services in the south to approximately 27,000 children and adults in the earthquake impacted areas.

Breathing and relaxation excercises, yoga meditation and art will be used in the workshops as part of this initiative.

“I went to Guánica and Ponce a few weeks ago. People are so anxious about what will happen next. Not everyone can go to a psychologist or psychiatrist. This could be a wonderful alternative,” Bischoff said.

She commented that Dr. Gordon will give a seminar in the island this week. Also, highlighting that CMBM programs have helped relieve post-traumatic in over 80% of the children and adults who participate in the program.

According to Bischoff the cost of the program for the earthquake impacted areas is $1,045,000 but so far, only $200,000 has been raised. Individuals or organizations that would like to make a donation can do so at betterpuertorico.org.

In the news: Center for Mind-Body Medicine Initiative

Since the signing of the collaborative agreement the Foundation has been active in moving the project forward.

The Foundation is actively raising the $3 million required for the project. To date, $1.8 million has been raised from the following donors: 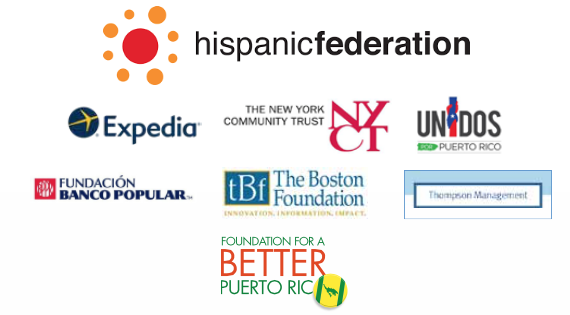